This most recent report on the violence that closed BFTW’s schools in Manipur, India was provided on September 23 by one of Bibles For The World’s staff in India, Rohny Pakh: So far, the worst effected area appears to be Ccp town area. Schools within the proper town have been altogether shut down. And it looks like until they hear something  concrete from the central government, it looks like things would remain this way including keeping the 9 dead bodies in the morgue, sit in protest, clamping of curfew, etc. LTL being in the interior area, is known to be […]

The Manipur region of India has been experiencing civil unrest due to political events taking place.  In fact, there have been some violent protests that occurred near our Sielmat Christian Hospital and Sielmat Christian Schools.  The Hospital  sustained damage from bullets and tear gas canisters, which were indiscriminately fired by police.  The photo below shows an ambulance, belonging to the Hospital, that was damaged by bullets. As a result, our India offices and these facilities have temporarily closed and regular communications have been suspended for the safety of all students and staff members. PLEASE NOTE THAT as of September 20, […] 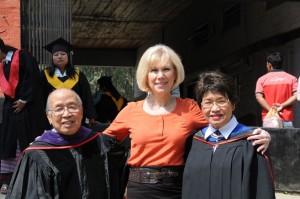 On a trip to India, the daughter of World Vision founder Bob Pierce reconnects with a Christian leader dear to her family. By Marilee Pierce Dunker Rochunga Pudaite and Bob Pierce “My grandfather was a headhunter. But by God’s grace, today I am a heart-hunter.” I was 10 years old the first time I heard Rochunga Pudaite make that statement, and I have never forgotten the vivid image it painted. Rochunga grew up in a village deep in the jungles of Manipur, India. His tribe, the Hmar, was greatly feared because members took the heads of their enemies as trophies. […]