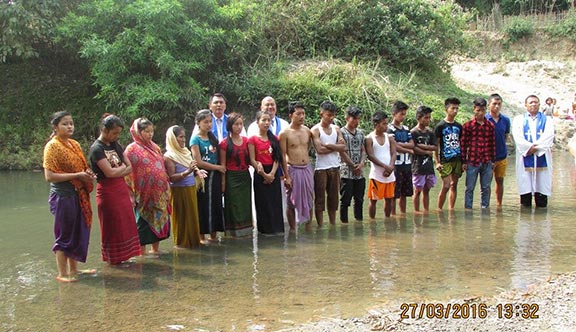 The weeks leading up to Easter have been a busy time for John and Mawii Pudaite and members of a Bibles For The World team of pastors and teachers!  BFTW conducted a series of Seed Sower’s Seminars during the two weeks before Easter — one in Imphal, Manipur, India and two more in Nepal — in Kathmandu and in Dhadingbesi.

Altogether, some 400 local pastors and lay leaders attended the seminars, which provided training and encouragement based upon the Gospel of John.  The majority of those in attendance — especially those in Nepal — are first generation Christians who were eager to celebrate their very first Easter Sunday.  However, many also endured great hardship to attend, especially those who traveled to Dhadingbesi in north central Nepal.  About 40 of those traveled on foot for three days before they reached a town where public transportation was available to cary them the rest of the way to the Seminar’s location.

When asked how many lost homes in last year’s earthquake, nearly everyone raised their hands.  But, they also indicated that the destruction opened many doors for local churches to express their love and concern for fellow villagers — and the opportunity to demonstrate the love of Christ to them.  As at all Seed Sowers’ Seminars, Bibles For The World distributed thousands of copies of Nepali Gospels of John for attenders to take back to their villages for evangelism purposes.

Upon returning to India, John Pudaite was part of a baptism service for new Meitei believers who were eager to celebrate Easter by being baptized!

Thank you for your continued prayers for these ministry outreaches in India and Nepal.

About Bibles For The World